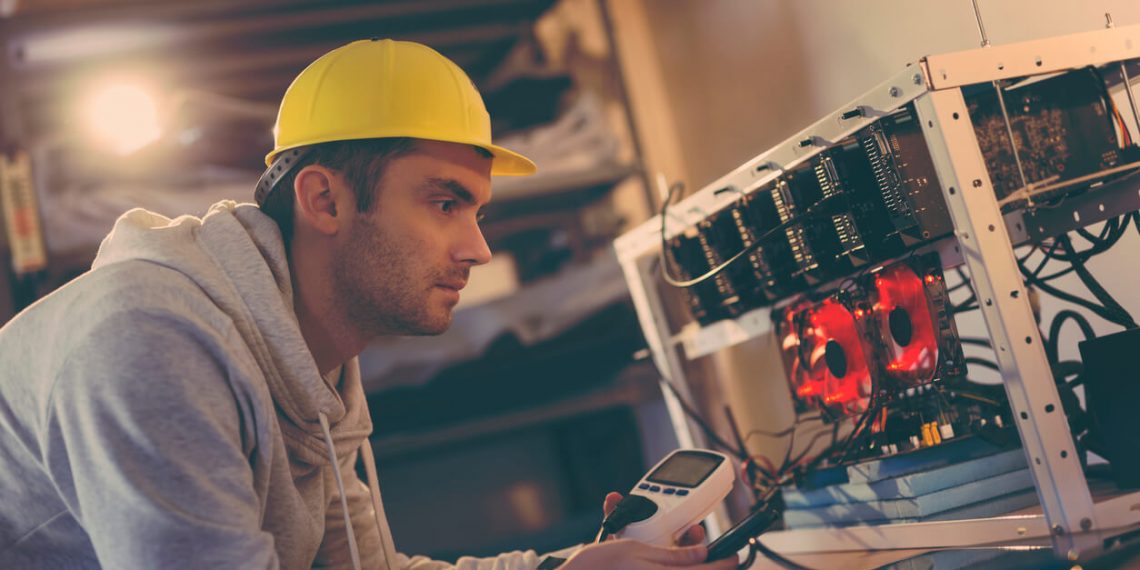 Ethereum is known to be one of the easiest cryptocurrencies to mine. It is light on resources and can be kickstarted with a basic gaming rig, making it one of the most beginner-friendly coins to mine.

More importantly, ETH mining has been very profitable between 2020 and the first half of 2021. Many people consider Ethereum to be one of the most reliable and blockchain platforms in terms of future potential.

That being said, there’s a reason why not everybody is rushing into mining Ethereum. This article aims to explore the technical as well as the business side of Ethereum mining for beginners.

How Does Ethereum Mining Work

To understand Ethereum mining, you first need to know how Ethereum works.

Like Bitcoin, Vitalik Buterin’s Ethereum is a blockchain-based platform running off a large decentralised network of computers.

Ethereum uses an almost similar mining algorithm based on Proof of Work (PoW) consensus. This is important to maintain the decentralisation of the Ethereum platform. Mining computers generate random hashes and test them against a new block until they find one that matches, then the other nodes on the network verify the key.

In terms of functionality, however, Ethereum and Bitcoin are a little different. While Bitcoin was specifically designed as a form of digital currency, Ethereum is more of a general platform upon which developers can build decentralised apps (d-apps or dapps) to do virtually anything.

You can think of Ethereum as a smartphone on which different apps can run. Developers can build these d-apps to run on the platform by using smart contracts, but they need to pay to use the resources made available by the platform. In other words, they pay “gas money” for the execution of their apps on the network.

Ethereum mining earns you both this gas money for facilitating transactions, as well as a standard mining fee of 2 ETH for each new block mined.

Ethereum’s cryptographic protocol is lighter than Bitcoin’s. Miners use fewer resources and different equipment setups to do so. For example, you mine Ethereum with a GPU only. That’s because Ethereum is memory-hard and tends to resist the special mining hardware used in Bitcoin mining.

Anybody with a computer can mine Ethereum, but being able to do so profitably is a different matter.

Since Ethereum is memory-hard, it is best mined using a powerful GPU such as is found in gaming rigs. Using this kind of dedicated hardware is far more efficient and allows you to actually mine ETH and earn from it.

Some manufacturers have also managed to build ASICs (application-specific integrated circuits) designed to mine Ethereum more efficiently. These are even more powerful than GPUs, but they are more expensive.

In this case, we will focus on creating a basic setup. There are a few requirements in order to get started:

Once you have the right setup, the rest of the setup should be easy.

How to Start Mining Ethereum

First, you will need a mining OS, such as Windows 10 or Linux. You can download this at minerstat.com. You will also need the right GPU drivers and an Ethereum Client such as The Mist package, which you can download here on Github.

A client package such as Mist comes with an inbuilt ETH wallet. You can also search for the best Ethereum wallets on Google to find those with the best reviews.

The wallet will give you an address where your mining rewards will be stored. Your mining client will have a place where you can copy/paste the wallet address during setup.

3. Set up the Minerstat software

To install the Windows mining software, you will need to first download and install the Minerstat software and create a free account. The software will guide you through the whole setup process, but you can watch this informative video if you need a more visual guide.

Ethereum Mining as Part of a Pool

If you want a more consistent payout and bigger profits, it is highly advisable to join an Ethereum mining pool of your choice. Some of the best pools include Nanopool, Ethermine, and Sparkpool.

Joining a mining pool is even easier to set up; here’s a video guide on how to get started with Nanopool. All you require is an Ethereum wallet address and your mining equipment setup.

However, the pool takes a percentage share of the profits you generate, which is 1% in the case of Nanopool.

It is important to know that Ethereum is shifting to a Proof of Stake consensus protocol, which will make mining unnecessary. PoS works like a voting system where nodes with higher amounts of money invested get a bigger say in the verification and authentication process. These nodes get the first shot at earning the mining and gas fees.

Ethereum 2.0, which will bring about this shift, is already in progress since December 2020. Ethereum developers who implemented this change say that it is more secure and lighter on resources such as electricity.

1. How much can you earn from Ethereum mining?

An entry-level gaming rig such as the Ryzen 6000 Series can earn about $20 a day without overclocking. The more rigs you have, the more money you can make. With just 10 of these running at regular, you can mine $100 worth of ETH daily. Minerstat has a useful list of all the GPUs you’re likely to use and their earning potential to help you compare since more powerful GPUs can earn you more.

Ethereum’s mining potential is capped at 18 million a year. A new block is created every 15 seconds, and the daily amount mined averages about 6,500 blocks. Unlike Bitcoin, Ethereum doesn’t have a lifetime cap. As of mid-2021, there was over 116 million ETH in circulation, although Vitalik Buterin has hinted at future changes that could limit this in order to manage inflation.

3. What is a good hash rate for Ethereum mining?

4. How long does it take to mine one ETH?

With a hashing power of 500 MH/s, it would take you just over a week to mine one Ethereum. However, the difficulty level is always changing, so the time it takes will depend on current conditions. If you tried to mine one block with a single RTX 3080, it would take about 615 days. This is why mining pools have a better chance of earning from mining than solo nodes.

5. Which is better to mine: Ethereum or Bitcoin?

Given Ethereum’s pending change to Proof of Stake and its relatively lower mining rewards, many miners prefer to mine Bitcoin and other coins. However, it is still a good time to mine Ethereum to build up your stake in preparation for the change.

If you’re just getting started, Ethereum will give you faster returns because it requires less expensive equipment to get started. It also has a lighter PoW algorithm, so its power and equipment maintenance costs are lower.

6. How much do you get paid to mine Ethereum?

Assuming you mine a whole block of Ethereum, you get paid 2ETH as well as any gas fees associated with the transactions in the block. In more practical terms, a rig with 5 GPUs could consistently earn you $1,000 per month.

Bitcoin mining and Ethereum mining aren’t very different from each other. However, mining Ether is easier on power consumption and computing power, so you are likely to recoup your investment more quickly. And, as you can see, it is very easy to get started with Ethereum mining, either on your own or as part of a pool.

What is the Lightning Network

Most Influential People in Crypto 2021