According to its earnings report on Wednesday, Facebook Reality Labs (FRL) division, which includes its augmented and virtual reality operations, generated only $285 million in revenue during the third quarter. This was significantly less than the average expert forecast of $406 million and was down from $452 million in the second quarter. 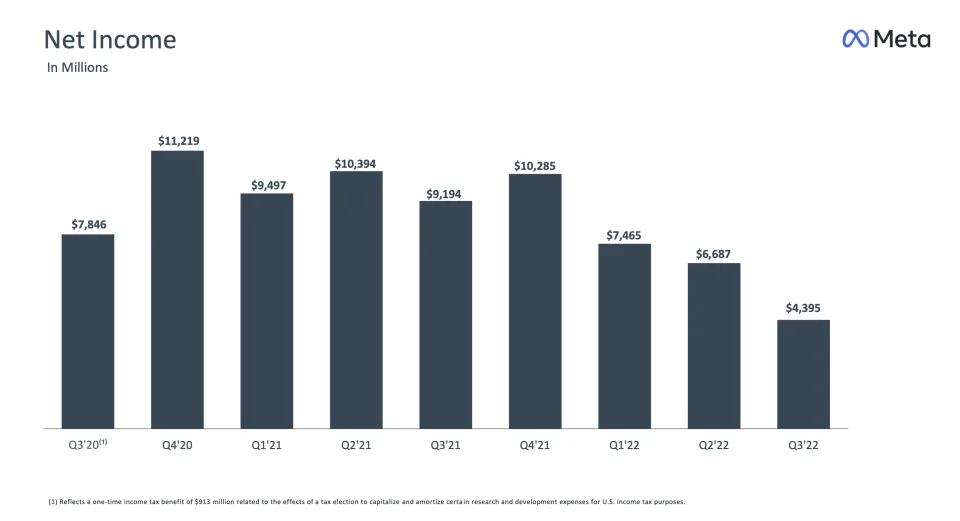 Overall, FRL incurred a quarterly loss of $3.7 billion, up from a loss of $2.8 billion in the previous quarter.

The company also predicted that FRL’s operating losses would increase substantially from 2022 to 2023. Beyond 2023, the firm anticipates investment in Reality Labs at a rate that facilitates its long-term aim of expanding the company’s operating income.

Mark Zuckerberg remained hopeful about the metaverse while acknowledging reservations about Meta’s future. He stated that it would be a mistake to ignore the metaverse since it will have a significant impact in the future. Meta CEO was also optimistic about Meta’s Quest Pro VR headset. She expected that in the future, more workers would be able to complete their tasks using virtual and mixed reality.

Wednesday’s after-hours trade saw shares of Meta fall nearly 15%. This year, shares have been down more than 60%.

Investors have urged Meta to limit spending on the metaverse, as slowed user growth and decreased ad expenditure have affected the company’s profits. Meta recorded a loss of $10.2 billion on revenue of $2.3 billion for FRL in 2021, and the firm has pledged to invest much more in the segment over the next several years, viewing it as a key growth driver.

According to FactSet, meta announced quarterly profits per share of $1.64 for the third quarter, missing the analyst consensus estimate of $1.90. However, the company’s overall revenue of $27.7 billion exceeded expectations of $24. It projected sales in the range of $30 billion to $32.5 billion for the fourth quarter, which at the midpoint of $31.25 billion was below the average forecast of $32.3 billion.

This week, Bank of America downgraded Meta shares from buy to neutral, noting that the firm’s massive investment in the metaverse will likely remain an overhang on the stock. Analysts are unlikely to deduct metaverse spending from earnings per share (EPS), given the lack of progress with users, the possibility of new competition from Apple, and a higher cost of capital mindset.

One of the world’s biggest financial service providers, Fidelity, has started opening retail bitcoin trading accounts. The move was made after the platform disclosed a waitlist.  Certain customers,...

The crypto lender BlockFi has recently filed for Chapter 11 bankruptcy protection, days after disabling users’ fund withdrawals due to the exposure to the now-bankrupt empire FTX.  Filing...

The company that created MetaMask, Consensys, has modified its privacy statement to begin collecting transactional IP and Ethereum wallet addresses. According to the release, the firm will also...

On the morning of November 26, Binance CEO Changpeng Zhao responded to the community’s questions, stating that: Binance holds user assets in separate wallets from those containing the...

The Jihan Wu-led crypto lending company Matrixport seeks to fund $100 million at a $1.5 billion value. According to Bloomberg on Friday, the Singapore-based company already has commitments...