Home » “My First Bitcoin” in El Salvador: How To Educate A Nation About Crypto

El Salvador’s grassroots Mi Primer Bitcoin, or “My First Bitcoin,” campaign is gaining traction. The program, initiated by John Dennehy, an American activist, and journalist, has the support of the Salvadoran government.

Dennehy and Gilberto Motto, El Salvador’s director of education, talked about the country’s problems and triumphs in Bitcoin (BTC) teaching and the rate at which it is expanding throughout the land of volcanoes.

When El Salvador adopted Bitcoin as legal tender on June 8, 2021, few Salvadorans could understand terms like satoshis, mining, or seed phrases. There was “Bitcoin Beach,” the term given to the tranquil seaside village of El Zonte, El Salvador’s cradle of Bitcoin adoption.

However, the 3,000 local inhabitants would have their job cut out to educate the remaining 6 million people. Indeed, hundreds of hours of training, studying, and “orange-pilling” would be required for Salvadorans to be able to store and transact in Bitcoin.

The Salvadoran administration faced a massive challenge. According to Motto, Article 6 of the Bitcoin Law states that the State will instruct on the usage of this cryptocurrency. But what would such training entail? How could the State offer Bitcoin lessons quickly and efficiently when they have to get to grips with new money?

The El Salvador experiment was being monitored by Bitcoiners, analysts, and the mainstream media simultaneously.

Dennehy, who has previously lived and worked in Latin America, said that once the law was announced, he needed to come to the nation as quickly as possible: “I knew that I wanted to do something to help make sure that it worked out, that it was a success here.”

Dennehy has long been predisposed to the separation of money and State. When he first learned of Satoshi Nakamoto’s invention in 2013, while residing in Ecuador, he became a fanatical Bitcoiner. He joked that, like other “OG” Bitcoiners, the first exchange he purchased BTC from was hacked, making him lose roughly 2 BTC – now worth over $40,000.

He needed to discover a means to contribute almost ten years later, arriving in the first country to embrace Bitcoin. He flew to El Salvador as soon as the chance presented itself. However, he was astonished by how few retailers and vendors accept Bitcoin, like other Bitcoiners who have made the trek to El Salvador. When the regulation went into force, there were zero merchants.

Rikki, a Bitcoin podcaster and activist who spent 45 days in El Salvador living only on Bitcoin, told similar tales about his adventures in Bitcoin Land, “No one here is familiar with Bitcoin. The administration did not offer El Salvadorans even a single second of education.”

Bitcoin has now been included in the country’s financial education and financial literacy programs. The Ministry of Education, Science, and Technology is collaborating with numerous institutions in the country related to Bitcoin, including Bitcoin Beach Wallet, Mi Primer Bitcoin, and others in constructing a Financial Education training program with current information such as cryptocurrency and digital wallets.

Dennehy started Mi Primer Bitcoin in 2021 as a voluntary organisation that provides free Bitcoin instruction to Salvadorans. It has secured investment from LookingGlass and IBEX Mercado, a Bitcoin and Lightning Network services provider.

Now this is an initiative worth putting time and effort into. Got some spots open for Bitcoiners that want to help and make a difference, at the grass roots level.

Dennehy had the idea for the program after his initial interactions with Salvadorans while getting to know his new home. He’d casually inquire, “Do you accept Bitcoin?” and quickly noticed that many individuals didn’t accept Bitcoin and requested Dennehy to explain the decentralised currency to them.

They were eager to learn more. They saw something with varying degrees of understanding, but all were fascinated. Dennehy arranged exploratory sessions in Airbnbs and conference rooms for some of the program’s first teachers. Dennehy explained that the first lesson was on September 24, 2021, at a yoga studio “since we were beginning from nothing.”

Dennehy and his crew persevered, unafraid and with conviction forged during numerous Bitcoin down markets. Classes had grown to about 80 pupils by October and over 250 by November. The fact is that interest level varies based on what the market does, such as the rising price of Bitcoin.

However, interest was maintained during the price activity in 2022. The class size hit an all-time high of over 800 pupils in April this year when the price dropped to an annual low. Dennehy noted that the seminars focus on financial literacy, from the history of money to the issues that money addresses. Financial literacy and Bitcoin education are inextricably intertwined.

Motto concurred with Dennehy’s assessment, noting that Bitcoin and financial literacy must coexist in El Salvador. Savings, paying taxes, managing expenditures, personal or family budgets, and other ideas are still applicable at the time, and sadly not everyone knows how to utilise them better.

Notably, the Bitcoin Diploma program is aimed at teens, who are the readiest to learn about money because they understand that money is inextricably related to their freedom. Dennehy believes it is a wise move since they are the most likely to spread the Bitcoin message throughout El Salvador.

“If we could reach every 16-year-old or 17-year-old in the country, we will effectively teach the entire country in one year because that demographic is incredibly strategic. They return home and converse with their parents, aunts, uncles, younger siblings, and sisters.”

The Bitcoin Diploma exam in week ten is divided into four sections. The initial step is to build a wallet, which will then be restored on another device. The second task is to create an on-chain transaction, locate it in the blockchain explorer, and explain why the transaction can be considered final. 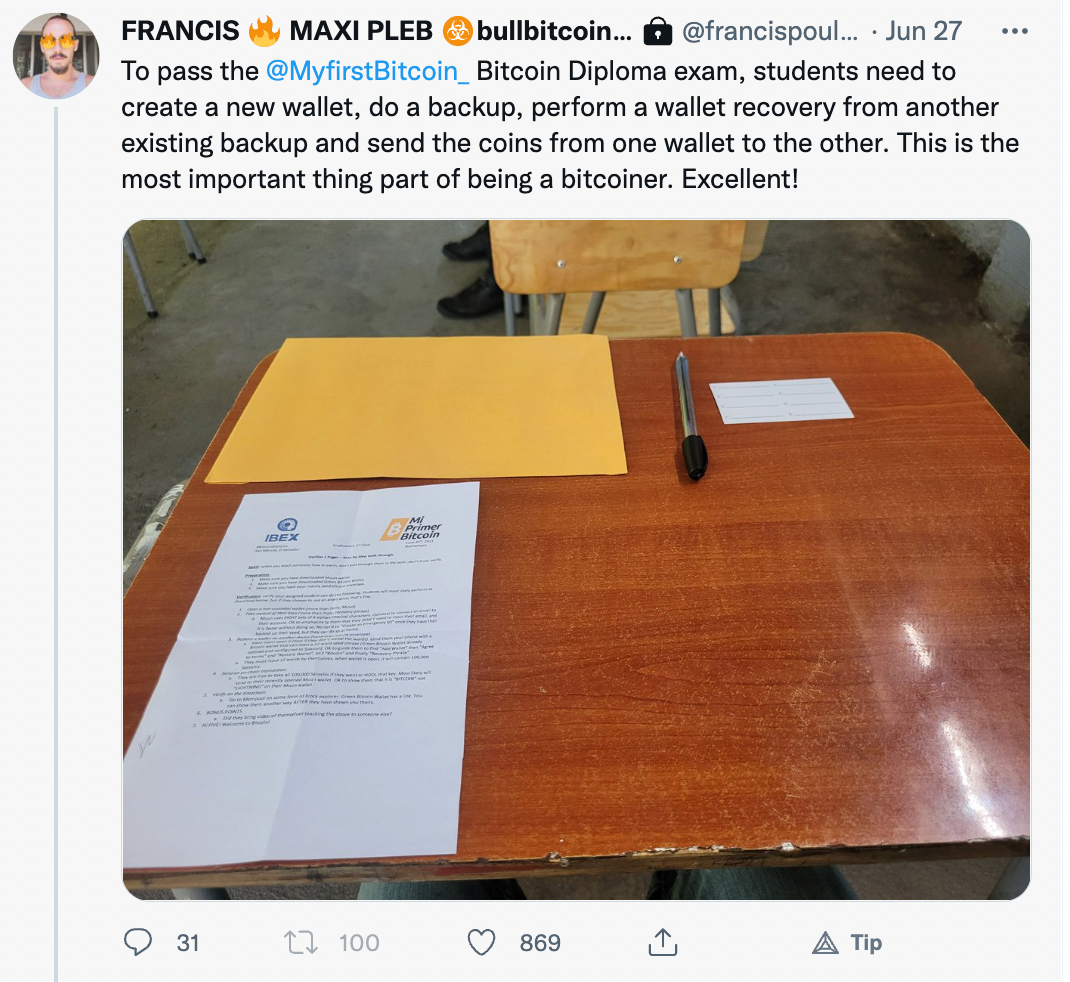 Dennehy estimates that 10% of the population are now active Bitcoin users one year after his arrival. Similarly, up to one-fifth of El Salvador’s retailers already accept Bitcoin.

Although progress is being made, Dennehy emphasises that Bitcoin is a global currency. El Salvador’s growth could be seen worldwide: “We are focusing on El Salvador because we have limited resources, and El Salvador is the signal. This is the battleground. Our objective, however, is worldwide. Our goal is not just to alter El Salvador but also the globe.”

“Once we create a successful template here, then the idea is to rebrand it as Bitcoin, El Salvador and then open up Bitcoin.”, explained Dennehy.