According to economists, markets have essentially factored in the shift, but sustained inflation might push cryptos into the negative. In June, the Fed increased interest rates by 75 basis points.

The Federal Reserve increased interest rates by three-quarters of a percentage point on Wednesday, doubling down on its unprecedented quantitative tightening stance.

The US regulator noted persistent inflationary pressures and good employment growth. The move is the central bank’s fourth rate hike, part of a plan to contain the most tremendous inflation in more than four decades.

According to Fed officials in a statement published after their two-day policy meeting, economic activity appears to have slowed slightly, citing lower spending and business output numbers.

The statement stated that while job increases have been steady in recent months and unemployment has been low, the crisis in Ukraine and ongoing supply chain concerns have contributed to persistently higher prices.

The Committee to change the stance

The Committee would be prepared to change the stance of monetary policy as necessary if risks that might hamper the Committee’s aims materialise. The Committee’s evaluations include various data, such as readings on public health, labour market conditions, inflation pressures and expectations, and financial and international events.

The news, which analysts say was primarily priced in, was positively received by cryptocurrency markets. Bitcoin and ether increased by 1.6 and 2.3%, respectively. The S&P 500 and the tech-heavy Nasdaq were unchanged — but still in the green at midday trade. 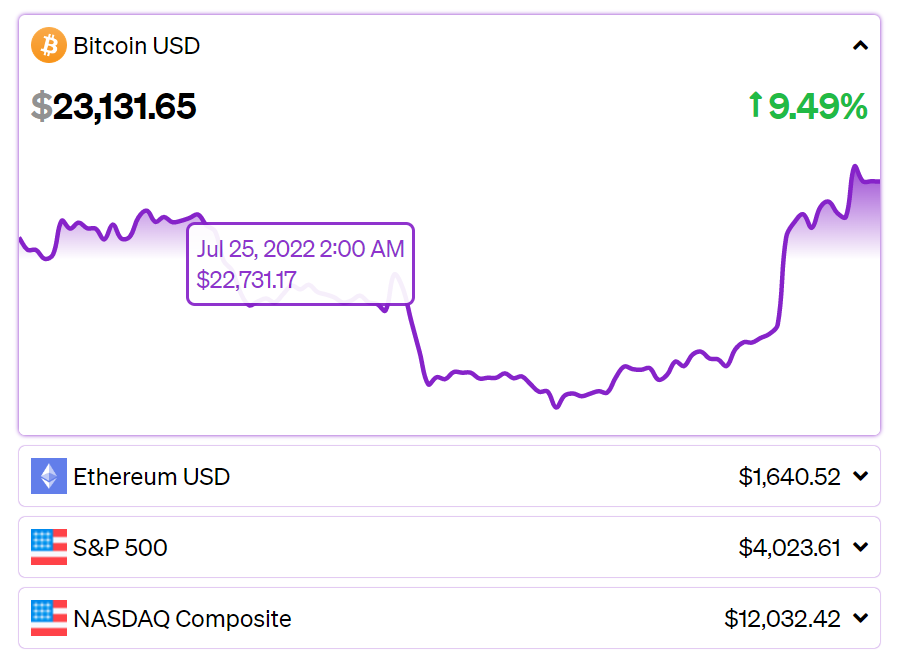 This 75 basis point rate rise came out as predicted, as stated by Steven McClurg, co-founder and chief investment officer of digital asset fund manager Valkyrie Investments. Most traders are expected to take risks off the table when they go on vacation for the remainder of the summer. The markets will gradually grind down on thin volumes without positive triggers until at least the next FOMC meeting in September.

Other analysts believe it is difficult to foresee future market changes.

According to Anthony Denier, CEO of trading platform Webull, we may see a relief bounce because the market has already factored in such a move. However, it might decrease if investors feel the Fed is still unable to manage inflation, which could entail additional hefty raises soon.