Consequently, the total market value of the digital asset is now $400.13 billion; the last time BTC had a market cap of this level was on July 18—more than a week ago. 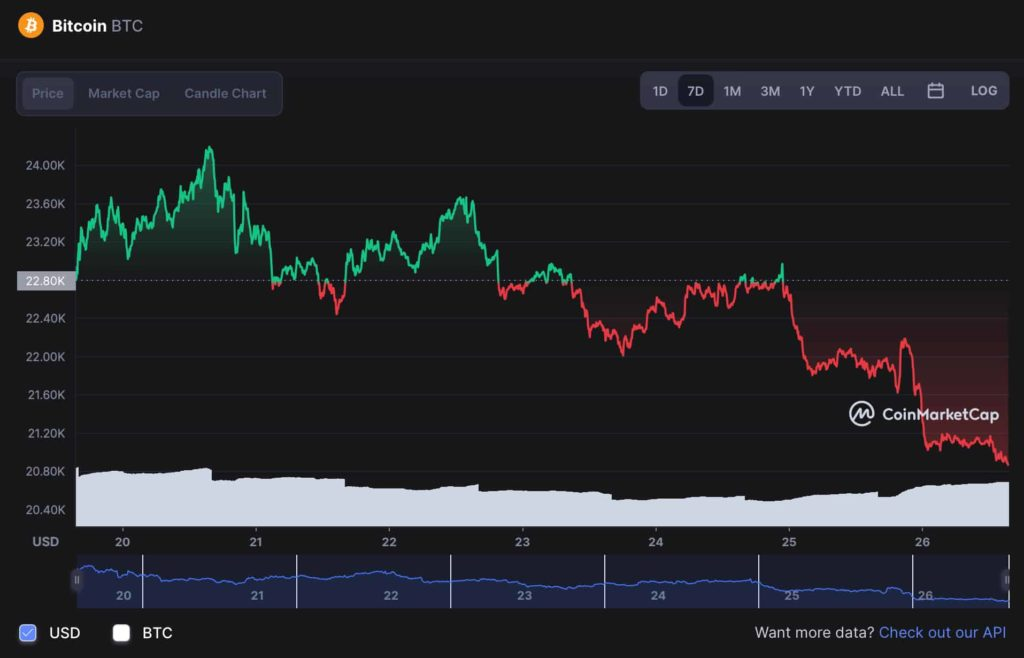 The drop has dashed expectations for a long-term Bitcoin recovery, relegating the token to a trading range of $19,000 to $22,000. The Fed’s expected 75-basis-point rate rise on Wednesday, July 27, is part of a tightening cycle that is pinching liquidity; as a result, investors’ appetite for risk looks to be waning.

Fairlead Strategies co-founder Katie Stockton remarked on some stability over the last three weeks, which gave some people hope that a bottom was being formed.

Fed hike may already be priced into the market.

Eight Global, a cryptocurrency consulting platform, is more enthusiastic about the Federal Open Market Committee (FOMC) meeting on July 27. The site stated that the federal funds rate is significant for cryptocurrency.

Eight Global noted that a 75 basis point hike is projected by the majority and is the most likely conclusion, but this has already been priced into the market.

A 75 basis point rise will have a neutral or favourable impact on equities and crypto since this has been priced over the last few weeks.

Now, why is the federal funds rate important for crypto?

Meanwhile, crypto trading specialist Michaal van de Poppe believes that with the markets falling, he is “looking at a $20.5K-20.7K level to hold for Bitcoin going into the FOMC tomorrow.

Due to the uncertainty, the regulatory oversight of the sector is getting increasingly stringent. Coinbase, for example, is under investigation in the United States for allowing Americans to exchange digital assets that should have been registered as securities.

The backdrop of global difficulties, such as Russia limiting gas supply to Europe and rising food costs, raising concerns about destabilisation in developing countries, adds to the uncertainty about the path that crypto assets may follow.

Finally, another obstacle for digital tokens is the performance of the US dollar this year in comparison to other major developed-market currencies.

DOGE To Reach $1 By December 2022: What Crypto Experts Predict?