The price of Bitcoin (BTC) has plummeted significantly over the last several months due to market volatility.

The Volatility of the Crypto Market

Cryptocurrencies are very volatile, meaning their prices often undergo significant fluctuations without warning. Throughout the last year, cryptocurrencies such as Bitcoin, Ethereum, BNB, Cardano, and XRP have seen fluctuating prices and other difficulties.

Investing in cryptocurrencies is a risky endeavour. Perhaps if you wager on what looks to be a safe bet, you may wind up with less money than the amount you invested or even can afford to lose.

If platforms fail, you cannot access your investment and convert bitcoin back into cash. There have also been warnings about cryptocurrency-related frauds resulting in the loss of enormous sums of money. It’s inadvisable to invest in what you do not fully understand and spend money you cannot afford to lose.

There are some factors for the recent volatility of cryptocurrencies.

Prior measures by the government to restrict the mining and trading of cryptocurrencies precipitated a market decline. And the upheaval in Eastern Europe has added to the fall since investors prefer to avoid risky assets during times of uncertainty.

Why Has Bitcoin Been Down?

The Bitcoin price is hovering at $21,000, down 10% over the last five days. Over the previous twenty-four hours, the value of the original cryptocurrency has declined by around 4%, with other altcoins also falling. 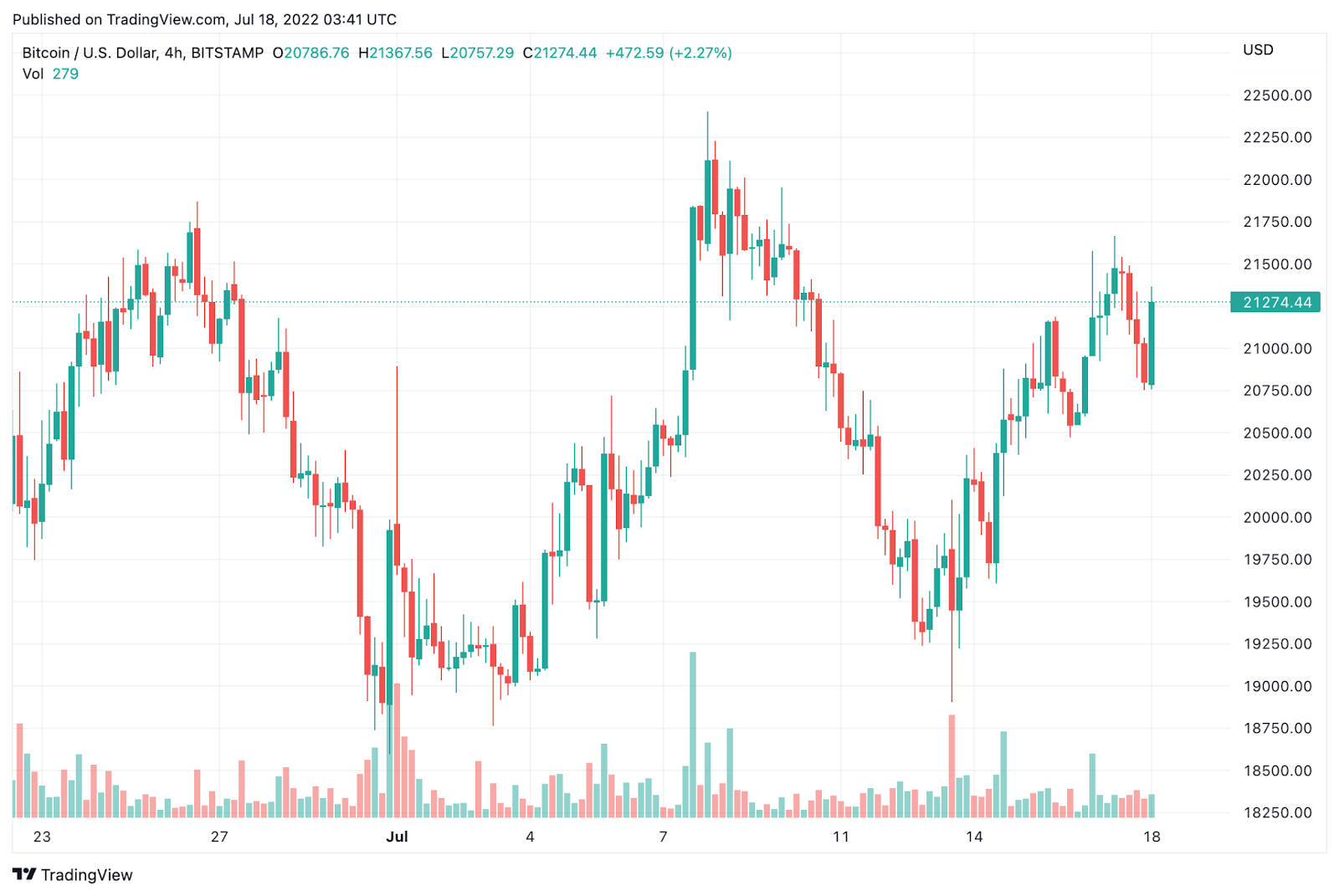 Ethereum has dropped by nearly 9% in the preceding twenty-four hours. The euphoria over Ethereum’s upgrade, known as the “merge,” has waned, while anxiety about the forthcoming rate rise by the Federal Reserve has skyrocketed.

Why the sudden trembling? The Federal Reserve plans another rate increase at its meeting on June 26-27. In reality, Wall Street analysts forecast a rise of 75 basis points (bps).

Meanwhile, inflation in the United States has grown to levels not seen in almost four decades, so many think the Fed has nearly no choice.

According to CoinMarketCap.com, the overall market capitalisation of cryptocurrencies is less than $960 billion.

Bitcoin started trading below the $28,000 to $32,000 range it maintained in mid-May, reaching a 52-week low of $17,708 on June 18. The decline came after reports of some crypto firms suffering from a liquidity shortage.

It was announced on June 16-17 that Three Arrows Capital (3AC) was bankrupt, adding to the growing list of insolvent crypto companies. Three Arrows Capital (3AC) defaulted on a loan from Voyager Digital on June 27; the debt was valued at around $350 million in crypto assets and included USD Coin (USDC) and approximately 15,250 BTC. Previously, 3AC was a significant supporter of TerraUSD/LUNA, the stablecoin that collapsed last month.

The sequence of liquidations by crypto lenders, including BlockFi, Voyager, and Celsius, was disastrous for 3AC, causing the company to fail.

Year-to-date, Bitcoin values are down over 56%, trading significantly below their all-time highs of around $69,000 in November 2021. According to experts, Bitcoin is no longer a hedge against inflation since it sells in lockstep with equity markets, which are also in a bear market.

In mid-June, Celsius, a decentralised finance (DeFi) platform and one of the major crypto lenders, significantly contributed to the bearish Bitcoin market mood.

Celsius developed a cult following in the crypto industry by advertising that users could earn an annual percentage yield (APY) of up to 18% by depositing their crypto assets on the business’s platform. The company has up to 1.7 million subscribers.

The firm accepts crypto deposits and lends them to other investors and financial organisations like a traditional bank. Users get a dividend based on the income Celsius makes through crypto-lending.

As of May 17, the business had $11.8 billion in assets under management (AUM), down from almost $26 billion in October of the previous year. The firm ceased revealing its entire AUM on its website in June.

Bitcoin Had a Challenge in 2022

Bitcoin finished 2021 up roughly 70%, a phenomenal return for any asset class, much alone without any actual value or the complete confidence and credit of a national economy. However, Bitcoin’s yearly return of 70% indicates a decline after earning more than 300% in the lockdown-plagued year of 2020.

Alex Reffett, the co-founder of the wealth management company East Paces Group, predicts that in 2022 investors will embrace a widespread flight to safety across the board in most asset classes. Investors have collectively exhibited a more significant interest in value-based investments and less in speculative equities and assets.

One reason is that the Federal Reserve, which has already hiked interest rates three times this year, is expected to do so again in July. The Fed is combating an inflationary spike that matches anything in the previous four decades.

Analysts predict the central bank will continue to raise interest rates through the end of the year and into 2023, but it is unknown how much will be increased. According to some predictions, the Fed funds rate might conclude the year at 3.5% or higher.

When the Federal Reserve raises interest rates, demand for growth firms, such as tech stocks, and speculative risk assets, like cryptocurrencies, decreases. Uncertainty surrounds how much demand for cryptocurrencies will exist when all liquidity has evaporated.

According to Steve Sosnick, chief analyst at Interactive Brokers, there was no historical precedent for how Bitcoin and other cryptocurrencies would behave during a protracted period when central banks deliberately drain liquidity. These are often challenging for investors, and riskier investments outperform safer ones.

Bitcoin Is a Risk Asset

Risk assets are investments that encounter a high degree of market volatility in the ordinary course of events. Stocks, commodities, high-yield bonds, currencies, and Bitcoin are risky assets since their values fluctuate regularly in all market situations.

Until recently, Bitcoin was a store of value relatively resistant to the risk assets’ price volatility. No longer is this the case. Today, Bitcoin and the crypto market are impacted by economic factors that alter the value of risk assets, such as inflation, stock markets, and Fed monetary policy.

The reason for this year’s decrease is that market narratives have moved from risk-on to risk-off, said Richard Smith, creator of the newsletter Risk Rituals. Liquidity is dwindling as the Federal Reserve, and other central banks begin to reduce excessive stimulus.

Bear markets are nothing new for seasoned Bitcoin investors. Throughout 2017 and 2018, the price of Bitcoin dropped by over 80%. However, this was before giant firms like Fidelity and PayPal committed billions to enter the cryptocurrency market. Owners of volatile cryptocurrencies need to know the tenacity necessary to maintain Bitcoin over time.