BTC Price Plummets Today After Bearish CPI Data: Why It’s Not All Bad?

The bitcoin price plummeted at the start of the US trading session as the US Consumer Price Index inflation exceeded experts’ expectations.

The price of Bitcoin is down 4.1% to $21,404, despite a 13% increase over the last week. Crypto traders awaited inflation statistics before determining their next course of action. 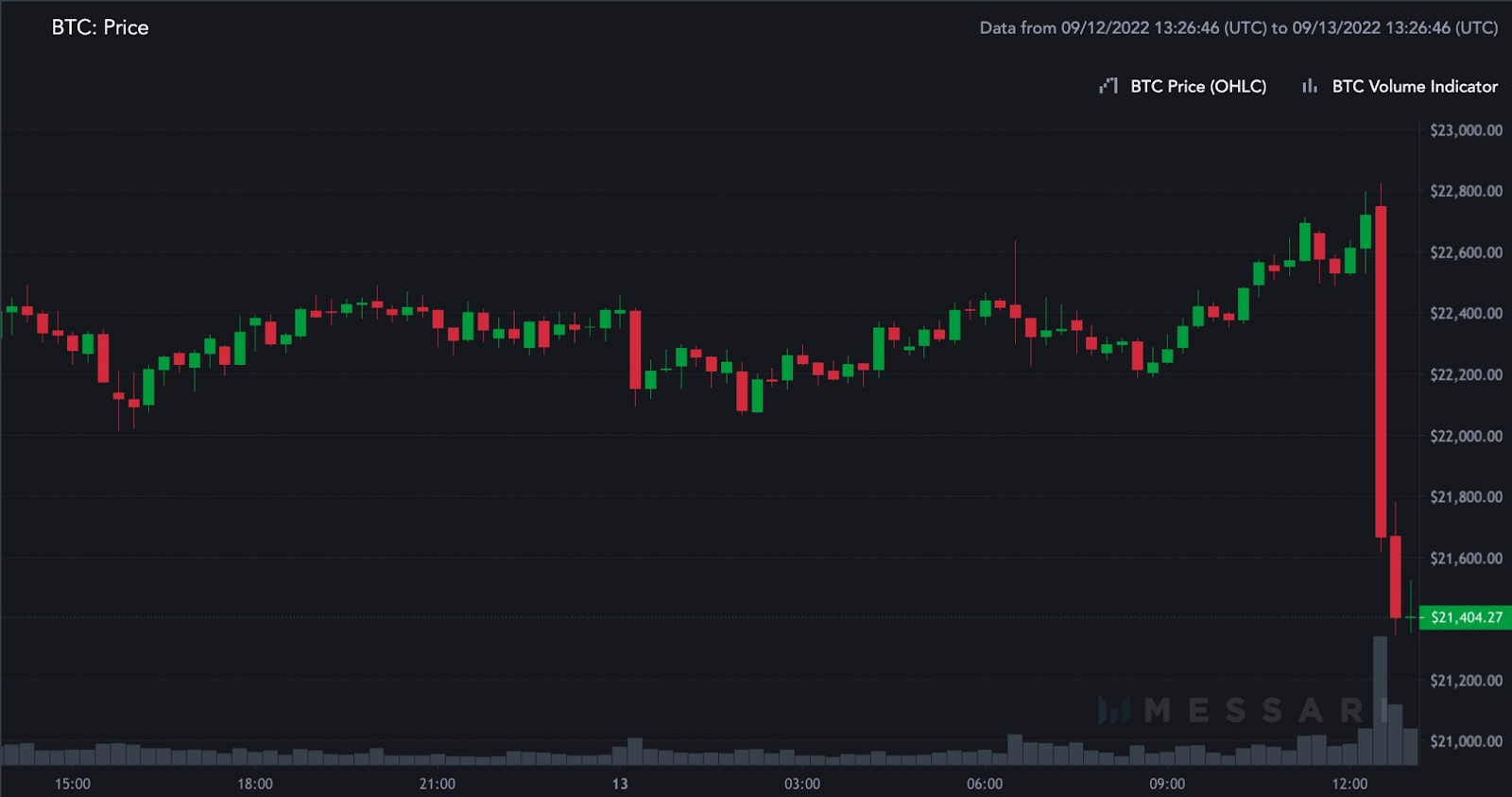 After being constant in July, prices increased by 1% every month in August, shattering optimism that the rate might stabilise before beginning to decline.

Bitcoin is not the best hedge against inflation.

Bitcoin was formerly marketed as a hedge against inflation in the expectation that its fixed supply would be viewed favourably by investors seeking to protect their money from erosion by a general price increase.

Unfortunately, this analysis failed to recognise how bitcoin and cryptocurrencies have become high-risk equities, with values increasing in tandem with tech companies.

Tech stocks and cryptocurrencies are the first to be dumped from portfolios. Higher-risk technology firms are often priced based on their projected future earnings; rising interest rates reduce these earnings estimates.

When investors seek to rebalance their portfolios by selling off riskier assets, tech stocks and cryptocurrencies will top the list.

Regarding the most recent inflation figures, while the annual rate is now 8.3%, down from 8.5% in July, this has not diminished the anticipation that the US would raise interest rates. The Federal Reserve will continue to raise interest rates aggressively to combat inflationary pressures throughout the economy.

Core inflation was higher than anticipated.

The recent decline in crude oil prices is responsible for the slight decrease in inflation compared to July.

However, core inflation, which includes food and fuel costs, was far above expectations at 6.3%, when 6.1% was expected. The figure for July was 5.9%.

The Fed will likely raise rates by an additional 75 basis points when it announces its interest rate decision the following week, as the Fed chairman stated last week that the central bank would move boldly to rein in prices.

Bitcoin price is still moving within the range of the preceding months; thus, worry is warranted.

The leading digital asset is still firmly within a range from a three-month price perspective. Now, market observers will observe how equities respond to the new inflation figures. 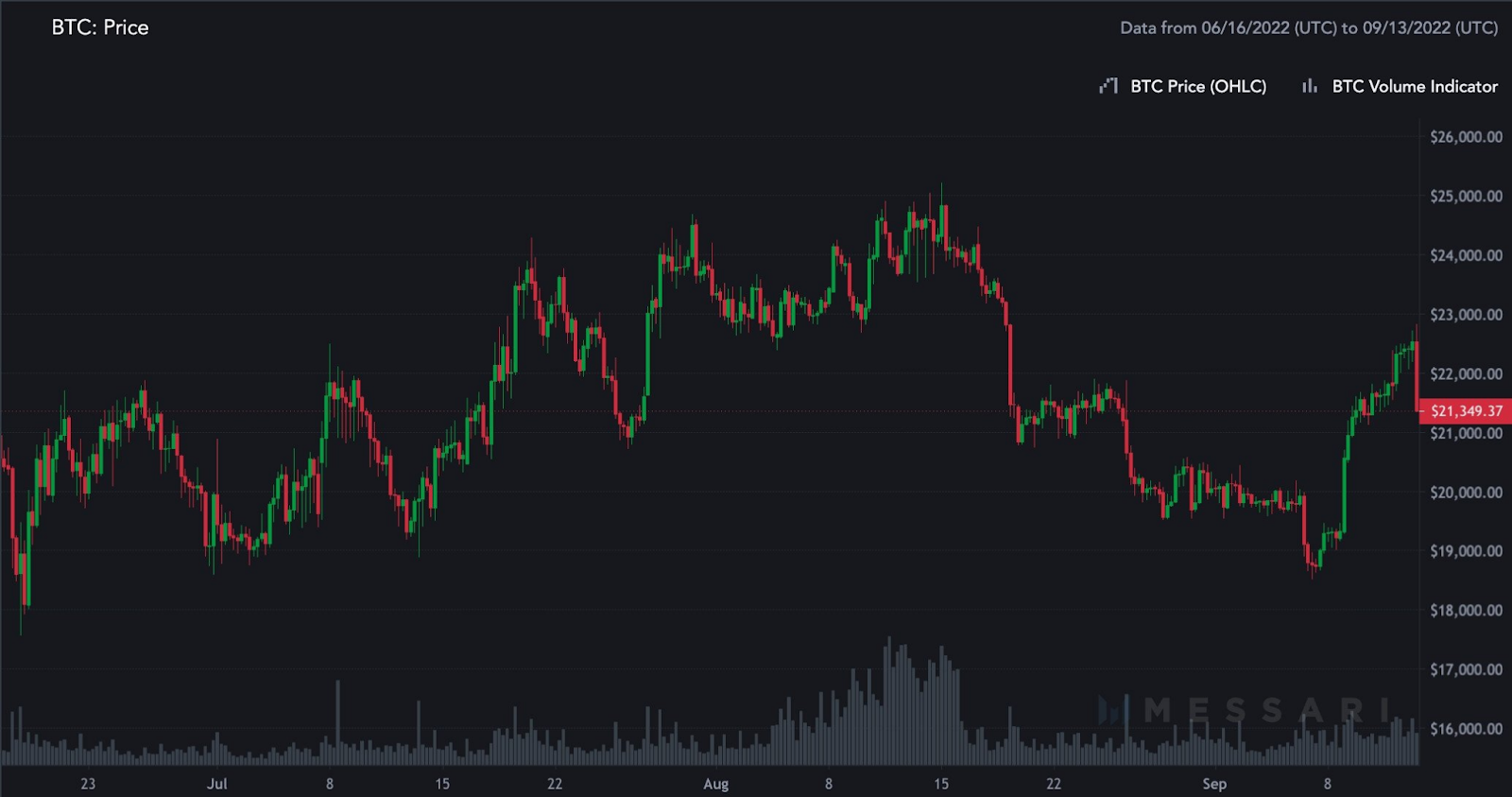 Futures for the S&P 500 index indicate a severe loss of 2% when US equities markets start.

Although bitcoin has lost its recently recaptured $22k level, the $20k market will be the most psychologically significant level to maintain.

Recent crypto price activity suggests that the market is reaching a bottom despite this recent decline.

Several factors, such as the deleveraging events, indicate that a price recovery may be imminent.

#Bitcoin is coming to 34 million accounts at @Fidelity.https://t.co/wgIvR7H8S9

In what would be a seismic event for the cryptocurrency, Bitcoin Magazine says that Russia might use bitcoin in international commerce as early as next year.

JUST IN: Russia to start international trades with #Bitcoin and crypto in 2023 🇷🇺

Quality altcoins are in demand, particularly in gaming.

There are other indicators, such as crypto investors’ interest in gaming-related businesses.

In other news today, venture capitalists continue to allocate to GameFi, while a Play-to-Earn meme coin called Tamadoge is gaining traction on a massive scale.

The meme coin, which seeks broad acceptance for its game, has earned $15.5 million from investors in less than a month, nearly as much as Ethereum raised in its initial coin offering token sale and more than STEPN and FTX combined.

When the presale reaches $16 million, the price increases from 1 USDT to 36.36 TAMA to 33.33; thus, interested parties must act quickly to avoid the following price increase. The limit is set at $19 million.

According to a crypto tax specialist, modern parents must closely check their children's gaming activities since some may be collecting a hefty tax bill. Adam Saville-Brown, regional head...

Bitcoin (BTC) is presently down 70% from its all-time high, reached in November 2021, as the bear market persists. Amid these unfavourable conditions, the BTC distribution rates of whales and miners...

After a two-year legal battle, the U.S. Securities and Exchange Commission’s case against Ripple may soon conclude. In their most recent court filing, Ripple Labs and two of...

LUNA, the token of the Terra blockchain's reconstructed version after the earlier downturn, quadrupled in value within a few hours on Friday. It's trading close to its all-time high...