What Is a Dynamic NFT?

Non-Fungible Tokens (NFTs) are making their way into the mainstream with coverage in major media outlets and a slew of high-profile athletes and public figures launching their own collections.

The next stage in the development of NFTs has just begun. Dynamic NFTs (dNFTs) are expanding the design space that NFTs are able to address by adapting and modifying in reaction to external events and data. This article discusses what NFTs are and how dNFTs are taking them to the next level, as well as current and potential dNFT use cases, and how Chainlink can be leveraged by those looking to develop dNFTs to give them access to trust-minimised off-chain data and computation.

NFTs are one-of-a-kind digital objects that exist on a blockchain. Every NFT is distinguished from the others by a  1-of-1 tokenID and a unique contract address. From there, metadata such as images, video files, or other data can be attached, allowing you to own a token that represents a unique digital object.

The most common NFT use case right now is digital art; an artist mints a token representing a digital artwork, and a collector can buy that token, marking their ownership. Once NFTs are minted, their tokenIDs don’t change. Keep in mind that adding metadata, like NFT’s description, image, and more, is entirely optional. An NFT, in its most basic form, is simply a transferrable token with a unique tokenID.

This static NFT model offers numerous advantages to digital artists all over the world. Previously, digital artists were unable to prevent, or even track, unauthorised distribution of their original artwork because there was no way to distinguish between any two files, and thus no single authentic file that could be owned. For the first time in Internet history, creators can sell digital art to their fans while providing verifiable ownership, and fans can prove they own an original artwork even if the underlying image is copied.

Static NFTs are currently the most common type of NFT, used for the most part by NFT art projects and play-to-earn game projects and as digital collectibles. Aside from these use cases, they also provide a unique value proposition for digitising real-world items such as real estate deeds, patents, and other unique identifiers.

However, because the metadata attached to static NFTs is fixed once they’re minted on a blockchain, this model is quite limited. Use cases such as tokenising real-world assets, developing progression-based video games, or creating blockchain-based fantasy sports leagues often require data to be updated. dNFTs provide the best of both worlds, with NFTs retaining their unique identifiers while updating aspects of their metadata.

Simply put, a dynamic NFT is one that can change in response to external conditions. Change in a dynamic NFT frequently refers to metadata changes triggered by a smart contract. This is done by incorporating automated updates within the NFT smart contract, which  instructs the underlying NFT when and how its metadata should change. 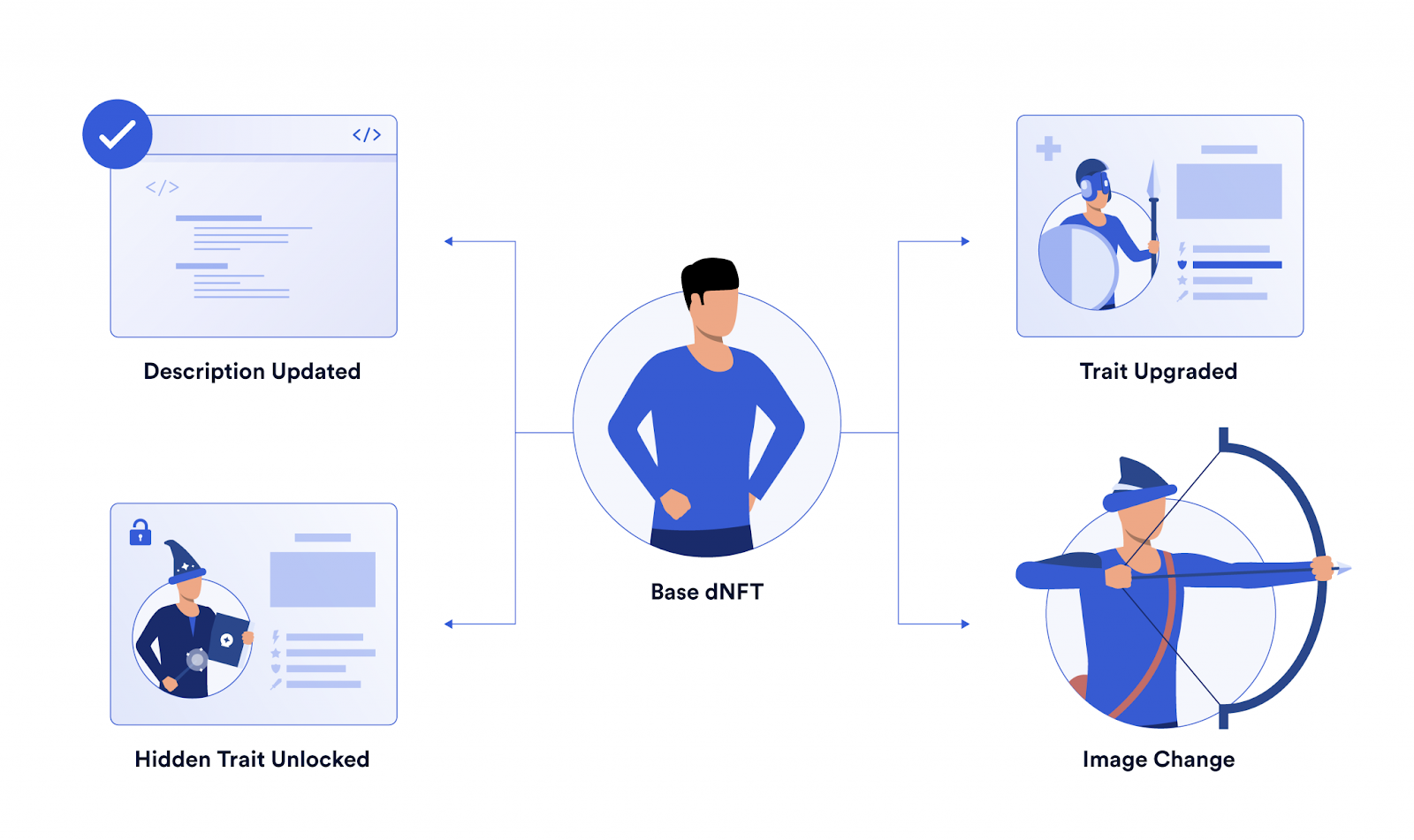 Dynamic elements besides metadata changes can also exist. For instance, dynamic NFTs can be minted when particular conditions are met, such as when a hidden spot in an augmented reality application is discovered. Dynamic NFTs can also house “hidden traits” manifested through user interactions instead of within the metadata. As fully unique and customizable tokens, NFTs can be programmed in an infinite number of ways. Most dynamic NFTs, however, must implement some form of metadata change in order for non-technical users to “see” the changes.

NFT metadata is where the token’s name is specified, traits are assigned, and file links are placed. While the tokenID serves as a permanent identifier for verifiable ownership, the metadata is the essence of the NFT—housing the elements that make it useful.

Generative NFT art projects often have a variety of traits, with some rarer than others. These traits are included in the metadata of an NFT, along with an IPFS link to an image or video that corresponds to the NFT’s traits. In a dNFT, these traits vary based on external conditions.

In blockchain games, this functionality can be useful for character progression, which is a core tenet of many different game models. When you first begin a game with a playable NFT character, the NFT’s metadata reflects its base stats. The metadata in the NFT changes to reflect the character’s growth as the player levels up. 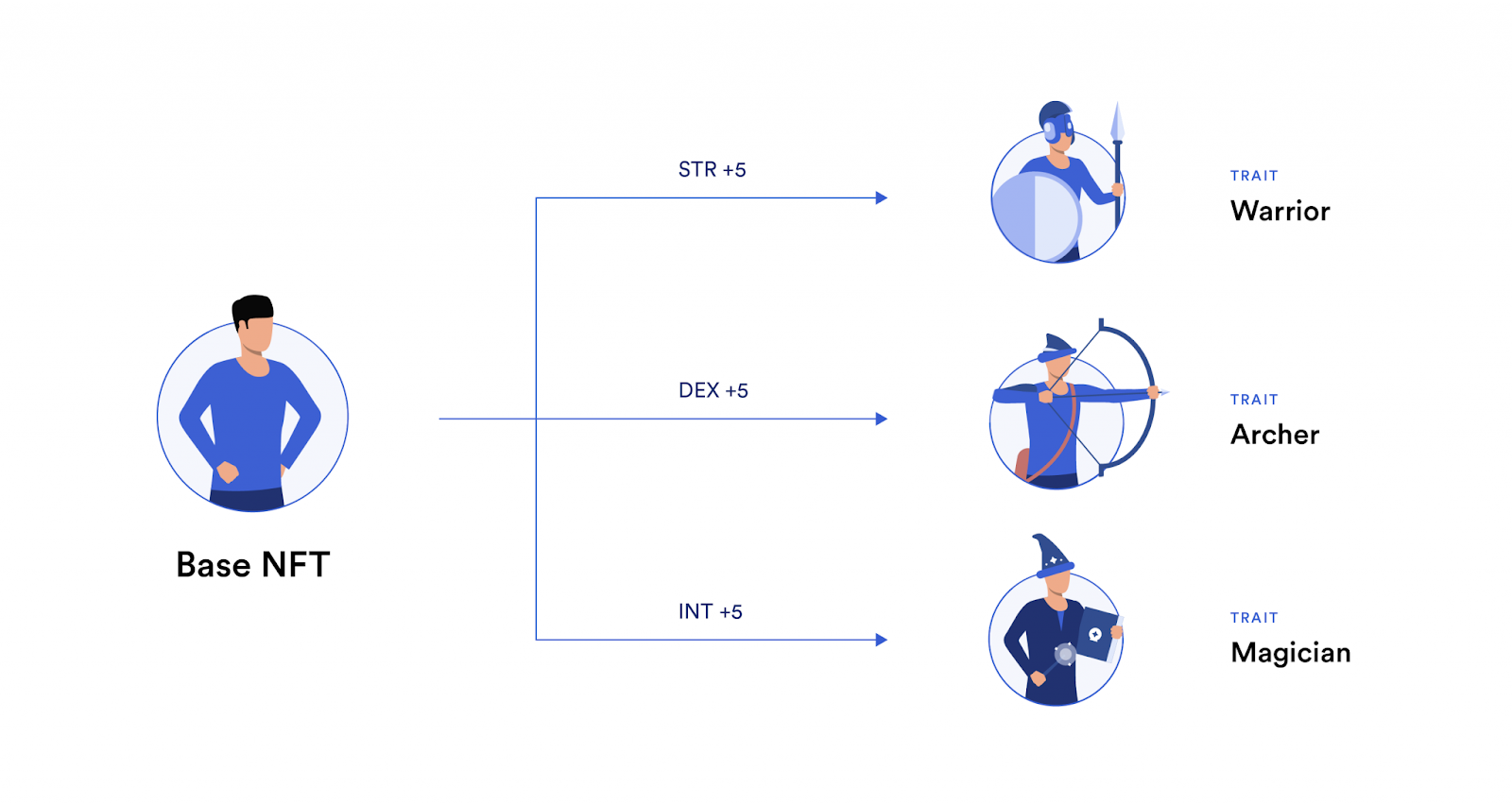 Another application of metadata changes is the tokenisation of real-world assets, where a host of changing metrics are often required. An NFT representing a property, for example, could include information such as its maintenance history, age, market value, and so on. Tokenising these changing assets requires NFTs which have the ability to update with changing metadata. These are just a few examples of dNFT applications. Changes to a dNFT’s metadata can, in fact, be triggered by any number of off-chain or on-chain events, demonstrating dNFTs’ limitless potential for expanding the NFT design space.

While the current Web3 ecosystem is dominated by static NFTs, a few notable projects have already sparked dNFT innovation.

In the past year, professional athletes such as LaMelo Ball, a rising star in the NBA, have created pioneering dNFTs that use Chainlink Sports Data Feeds to redefine player-fan relationships.

Currently, there are eight different LaMelo Ball NFTs, each of which records a different set of LaMelo’s player statistics, including rebounds, assists, and points. Based on LaMelo’s ongoing performance, NFT holders may be granted special access to raffles and other NFT-specific benefits.

The Gold Evolve NFT, one of these eight NFTs, came with a unique promise: if LaMelo Ball won Rookie of the Year for the 2021 NBA season, the NFT would evolve to reflect a new image. LaMelo won the award and the NFT evolved.

LaMelo Ball NFTs are a good example of dNFTs that change in response to external data. In this case, LaMelo’s player statistics are constantly updated on-chain within the NFT, triggering display upgrades, rewards, and other benefits.

RRC announced that it will launch five dynamic Short Film NFTs designed by prominent artists, with the proceeds going towards seeding and growing 100 million mangroves across RRC’s current projects.

Each Short Film NFT will begin with a single frame. When an NFT is purchased or resold, more frames are released in a continuous process until the NFT holder can view the entire short film.

An often overlooked component of dNFT design is how to reliably source the information and functionality needed to build a secure, fair, and automated dNFT process.

As previously stated, dynamic NFT metadata changes can be triggered in a variety of ways based on external conditions. These conditions can exist on and off the chain. Blockchains, on the other hand, are inherently incapable of accessing off-chain data and computation.

Chainlink overcomes these constraints by providing a variety of off-chain data and computation services that can be used as inputs to trigger dNFT updates. Chainlink acts as a bridge between the two disconnected worlds, enabling automated, decentralised, and engaging dNFT processes to be built as the dNFT ecosystem grows and NFTs become more heavily integrated with the real world.

Chainlink Data Feeds and Any API

Chainlink Data Feeds is an off-chain data delivery service that can securely deliver sports results, weather readings, or any other type of data to be used to update a dNFT. Chainlink Any API allows seamless connections between any API and an NFT smart contract for data offerings that are unique to a project.

This service is critical for use cases such as LaMelo Ball dNFTs, which rely on on-chain sports data to trigger metadata changes. However, this is only one of a plethora of possible applications. Chainlink, as the most widely used decentralised oracle network, is well-positioned to provide off-chain data to any dNFT that uses real-world data.

Chainlink Keepers is a secure smart contract automation service that can be used to trigger dynamic NFT changes when predefined conditions are met, such as when La Melo Ball reaches a certain stat threshold, such as 1000 points.

Chainlink Keepers make it simple to build truly autonomous and decentralised NFT processes and ensure that user-owned dNFTs work exactly as specified. Chainlink Keepers, when combined with Chainlink Data Feeds and Any API, can enable the development of automated and engaging shopping rewards dNFT programmes, eco-friendly behavioural tracking via dNFTs, and more.

Chainlink VRF is a verifiable RNG that can be used to kickstart dynamic changes in a dNFT—a feature that is especially useful for GameFi projects. Randomness is used in the vast majority of video games, for example, to determine the success rate of attacks, what items come out of a loot box, or even to decide what colour a character’s shirt will be after using a cloth dye.

Because play-to-earn games have real monetary value, it is critical that the RNG mechanism used is transparent and tamper-proof.

Chainlink provides the off-chain data and computation required to build next-generation dNFTs across a wide range of use cases, paving the way for dNFTs to enter the mainstream.

NFTs provide tangibility to the digital world as verifiably unique digital objects, and dNFTs are a natural next step in furthering this paradigm shift.