After years of research and delay, the Merge, a considerable redesign of Ethereum, has finally occurred, transitioning the digital machinery at the core of the second-largest cryptocurrency by market value to a considerably more energy-efficient system.

It was no easy task to go from proof-of-work (POW) to proof-of-stake (POS). Before the Merge, Justin Drake, a researcher at the non-profit Ethereum Foundation, likened the Merge to replacing the engine in a running automobile.

Now, Ethereum should use around 99.9% less energy. According to one estimation, it’s as if Finland abruptly disconnected its electricity system.

At 6:43 a.m. UTC, when the Merge officially began, almost 41,000 individuals were watching an “Ethereum Mainnet Merge Viewing Party” on YouTube. They waited to see the key metrics indicating the integrity of Ethereum’s core systems. After around 15 minutes, the Merge finished successfully. The price of ETH, the second-largest cryptocurrency behind bitcoin (BTC) based on its current market value of close to $195 billion, remained relatively stable following the Merge. 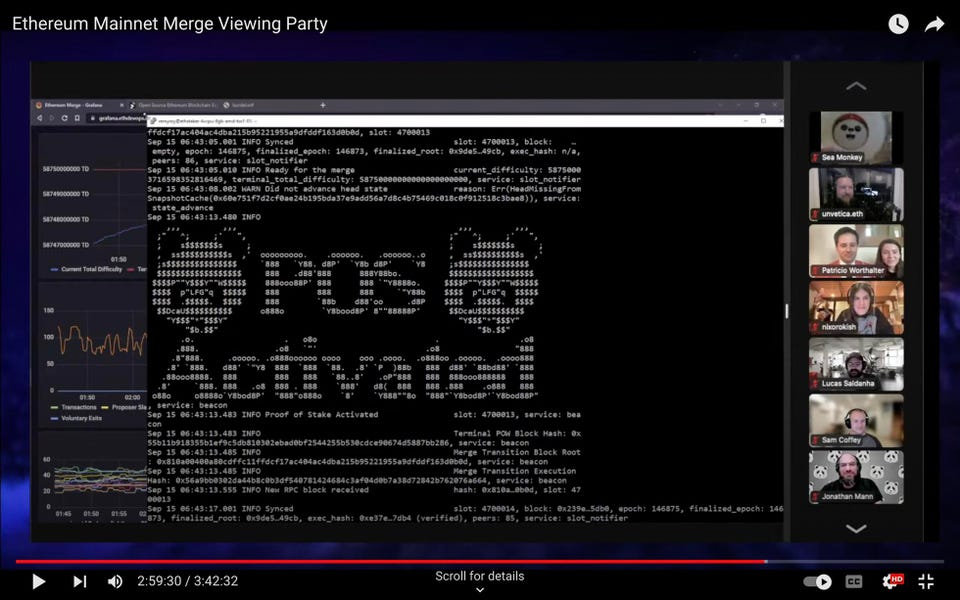 The impact of the upgrade, which removes the network’s reliance on the energy-intensive process of cryptocurrency mining, has been widely monitored by crypto investors, enthusiasts, and sceptics.

The new Ethereum mechanism, proof-of-stake, eliminates the role of miners.

Miners are replaced with validators — those who “stake” at least 32 ETH by transferring them to an untradable address on the Ethereum network.

These staked ETH tokens are similar to lottery tickets. The more ETH a validator stake, the greater the likelihood that one of its tickets will be selected, providing it with the authority to add a block of transactions to Ethereum’s distributed ledger.

Beacon Chain, Ethereum’s proof-of-stake network, was created in 2020, but before the Merge, it was only a staging location for validators to prepare for the transfer. For Ethereum to migrate to proof-of-stake, the Beacon Chain was merged with Ethereum’s main network.

According to Beiko, the environmental effects of proof-of-stake energy usage are not even a rounding error.

Edgington, the product leader at the Ethereum research and development firm ConsenSys, identified the environmental effect of the Merge as the advantage he is most enthusiastic about. “I feel very proud, you know, that I’ll be able to look back and say I’ve had a role to play in removing a megaton of carbon from the atmosphere every week. That’s something that meaningfully affects my family and others,” he said.

During Thursday’s viewing party, Vitalik Buterin, Ethereum’s co-creator, reacted to the Merge by saying, “This is the first step in Ethereum’s big journey towards being a very mature system, but there are still steps left to go.” The upgrade did not address Ethereum’s relatively high fees and poor speeds, which remain a barrier to the network’s user growth as environmental concerns ever were.

Buterin, Ethereum’s most prominent spokesperson, has previously detailed a set of next steps for the network that includes sharding — a mechanism to alleviate the network’s slow transaction speeds and high fees by distributing transactions over shards, similar to adding lanes to a motorway.

This update aimed to coincide with the move to POS, but it was deprioritised due to the rollups that resolved the same issues.

Rollups predict a possible future for Ethereum development in which community solutions – rather than modifications to Ethereum’s core code – will play a key role in increasing the chain’s capabilities.

According to Buterin, the Merge is only the beginning for Buterin. The Merge represents the difference between early-stage Ethereum and the Ethereum we constantly desired. Therefore, let’s build out the rest of this ecosystem and transform Ethereum into what we want.

Swyftx vs. Crypto.com: Don’t Choose Until You Read This Article